I have recently taken up coffee roasting. I’ve always liked a nice espresso, and so, encouraged by the efforts of others at coffeesnobs.com.au (a nice bunch of coffee fanatics), I’ve built a computer-controlled roaster. Of course, it’s based on a Raspberry-Pi! 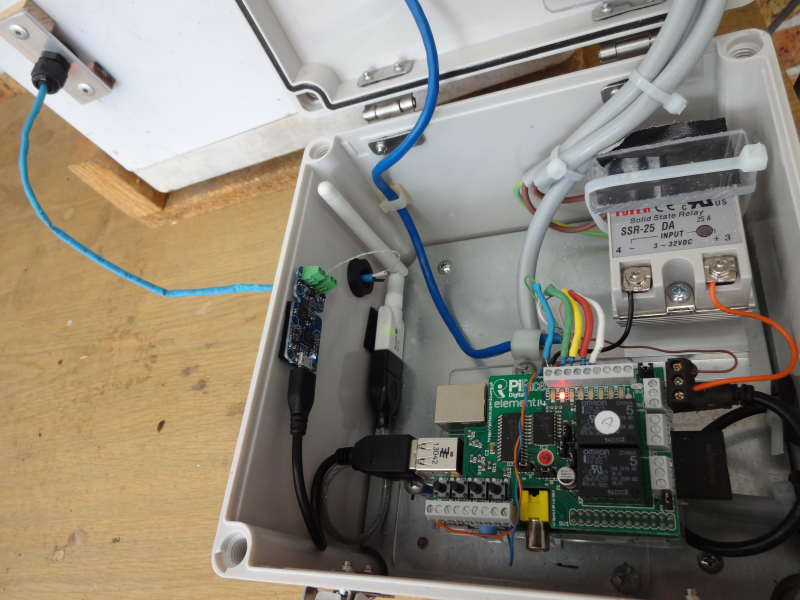 The configuration and monitoring of the roast is done via a web interface that looks like: 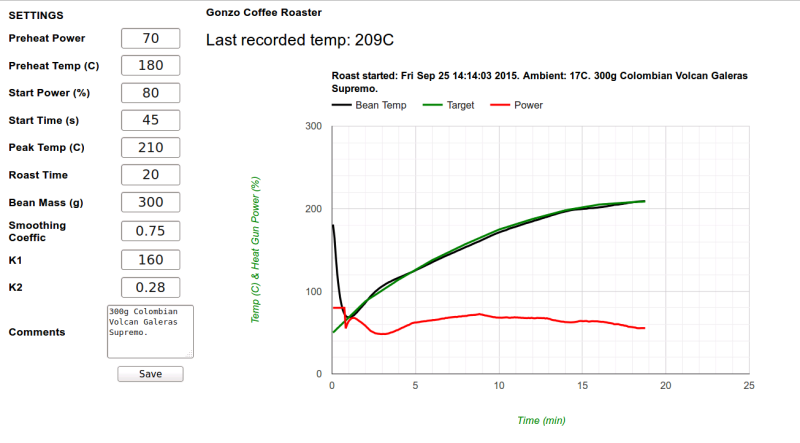 The meaning of the various configuration options is explained in the Details section below.

The temperature is measured by the Yocto-thermocouple. Yocto supply drivers for whatever operating system and whatever programming language you use. The temperature reading is smoothed using a smoothing coefficient. The higher the coefficient, the more rapidly the temperature adjusts, but the less smooth it is.

The Ryobi hot air gun has had its fan wiring separated from its heating coil wiring, so that the fan runs flat out all the time (on a separate ~19VDC power supply), and the heating power can be pulsed on and off by the Fotek SSR. The heating cycle is 2 seconds, so for 75% power it is on for 1.5 seconds and off for 0.5 seconds. There is a separate background python program that runs the pulse-width-modulation of the SSR/heatgun.

IMPORTANT NOTE: you must make sure that the fan is never off when the heating element power is on, or a fire is likely.

I have removed all the electronics from the breadmaker, and have left only the motor drive components, so the stirrer runs continuously. Also, I have added an extension to the paddle, so the coffee beans are more strongly agitated. I have removed the original lid and replaced it with a particleboard cover with holes for the heat gun and for the exhaust air.

My files are available here:

and here’s what they all do: