Understanding the Mouthpiece Settings on the Roland Aerophone AE-10

Note: As of Dec 2019, Roland has released firmware version 3.10 which makes this analysis redundant. I’ll leave it here for info…

I have a Roland Aerophone AE-10 wind controller. It comes with a mouthpiece that has a reed. This enables the player to pitch bend or do other effects by utilising bite pressure. I really like this feature as it has a very similar action to an acoustic saxophone, and it was one of my main reasons for buying the instrument.

I have done some investigation work with the aim of understanding the functions of the mouthpiece settings. The Roland Owner’s Manual gives a lot of information, but doesn’t explain everything. At the same time as doing this work I have been experimenting with 3D printed reeds, and they have added another dimension to the analysis.

This work as been done using Version 3.00 of the firmware and is using “Pit1” value of the “BiteCtrl” setting.

Thanks to members of the Patchman Music Forum, particularly Andy Hornblower, for helpful comments and analysis.

This shows the mouthpiece with the original Roland “soft reed” fitted. Roland have subsequently introduced a “hard reed” – more on that later. The sensor finger inside the mouthpiece follows the reed position and enables the bend function. Note that I will be talking about pitch bend here, but the analysis applies to other functions to which you may assign the bite control.

I have noted three positions above. R is the REST position of the reed when it is not compressed. C is the CLOSED position of the reed when it is fully compressed. S is the SWITCH band. I originally thought that the bite control would be a progressive function, i.e. a small change in the reed position would make a small change in pitch, and a large change in reed position would make a large change in pitch. It actually does occur like that (I checked the MIDI messages that are sent), but the distance over which the change occurs is so small that it operates more like an on/off switch (on my instrument, anyway). I’ve represented it on the above photo as a grey band. When I cross the S band the pitch changes from no bend to full bend and vice versa. Full bend is set by the “Pit Dn” setting on the menu. Therefore in Zone A the instrument is on-pitch, and in Zone B it is at max pitch bend down. Now, for most situations this is fine, as I delve into pitch bend for only short times and it doesn’t need a progressive bend. However, if I want to do a lengthy slide up to a note, then I have to use the portamento function or the right thumb joystick control.

Note here that increasing the “BiteSens” menu item seems to make the bite action a bit more progressive and less like a switch. However, even at its maximum setting of 100 the distance over which the bite control operates is still small.

A side-effect of this arrangement is that it is virtually impossible to fine-tune the instrument by bending the pitch with your mouth. The bending action is too abrupt.

In the AUTO mode the position of S is determined by how hard you have squeezed the reed in the current session. The instrument continuously measures the reed position and records how far you have compressed it. The instrument then sets the highest compression as the top of the S band (zero-bend) and creates the narrow bending band below it. If you subsequently compress the reed further than that, the S-position will move to that new position.

For me, the AUTO setting results in Zone B being too big and Zone A being too small. In fact, if I happen to compress the reed all the way to C, then Zone A is virtually zero, and it means that I only have to release my bite a small amount to have the instrument lose pitch.

In firmware release 2.20,  Roland introduced the ability to set the S position. The idea is to select the “Bite Adj” menu item then put the mouthpiece into your mouth, make your normal embouchure, and press the +2 octave button. This records what the sensor reads in that position.

I found difficulty with that method, so I use the following:

How much you add is dependent on your preference. If you add nothing – you get no bend. If you add too much – position S is beyond position C and you can’t get the note on-pitch.

NOTE: it is necessary to re-do this adjustment after a removing and replacing the mouthpiece, as the R position is likely to have changed.

There are a few hidden menu items. I didn’t discover them – some keen users on the Patchman forum found them. What they appear to do is this:

How big is the bend?

I also checked the MIDI messages that are sent out when I operate the bite. I assume the same bend messages are going to the internal synth (? dunno). Full bend is set by the “Pit Dn” setting. The actual MIDI value sent is -64 times the Pit Dn value. Thus, if Pit Dn is 10, the MIDI value sent is -640; if Pit Dn = 64 (max) the MIDI value is -4096. The C position gives a MIDI value of zero. Note that the MIDI spec for bend is 8192 not 4096. The Aerophone puts out only half the allowable bend. This was discovered earlier by someone on the Patchman forum.

How big is the S-band? The difference between Bite3Min and Bite3Max determines how big the S band is. Bite3Min is a % less than Bite3Max. It is automatic, depending on the value of Bite3Max. It looks like this: 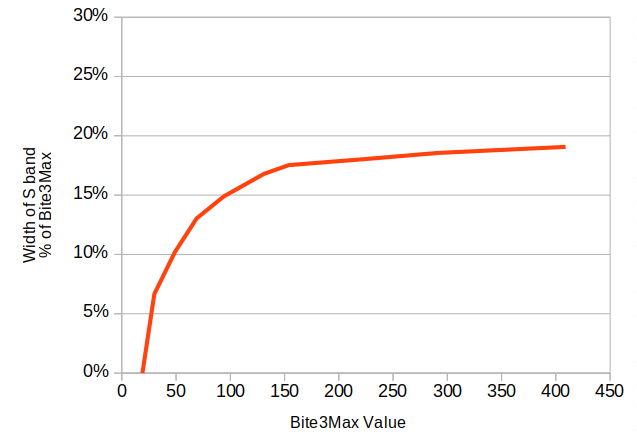 I made a jig to compress the reed so I could measure the size of the S-band. I super-glued a nylon nut to my spare AE-10 mouthpiece cap like this: 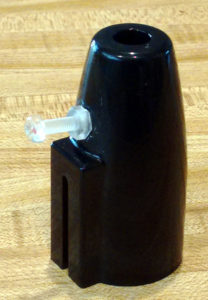 I adjusted the screw and recorded the results: 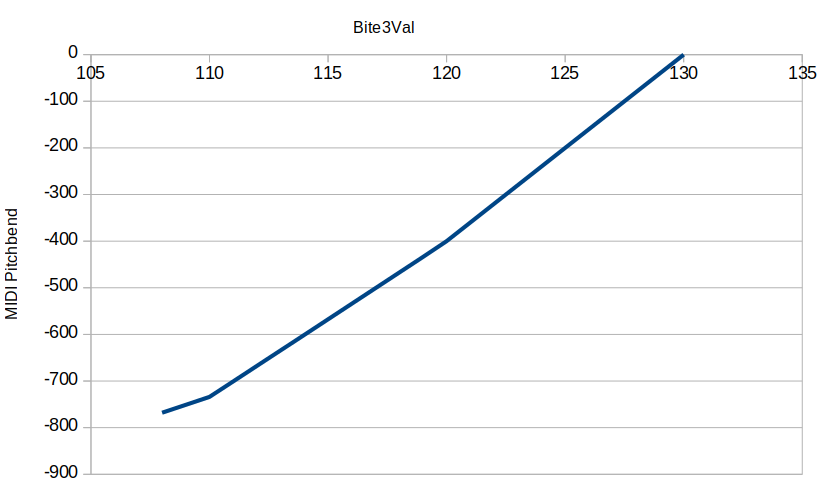 This shows that the bending is linear between the Bite3Min and Bite3Max values. I didn’t do it for any other values of BiteAdj, as I assume it’s going to be similar. In physical terms, the bend distance for this example to go from no bend to maximum bend is about 0.09mm . That ain’t much! No wonder it is difficult to get an in-between value of pitchbend using my mouth.

I also took the opportunity to measure the sensor finger movement. It came out like this: 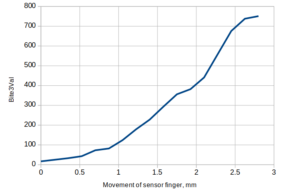 What this shows is that the movement is essentially linear between the Bite3Val readings of 150 to 650.

This is what the Roland Hard Reed looks like:

The immediate thing you notice is that the aperture at the end of the reed in the R position is much smaller than it was for the soft reed. That means that the space available for Zone A and Zone B is greatly restricted, and so it is more fiddly to set the S position.

The reeds on the left are Roland ones, the reeds on the right I have designed and printed. I was initially making the hard reed style even thicker and stiffer than the Roland one (No. 6 above), but now I’ve decided that I want the large A and B zones, so I prefer somewhere between the Roland soft reed and the Roland hard reed. I tried the 1.0 reed above, which is 1.0mm thick PLA and is a little stiffer than the Roland soft reed. It worked well, so then I made it with a mounting block attached, and the final version looks like this: 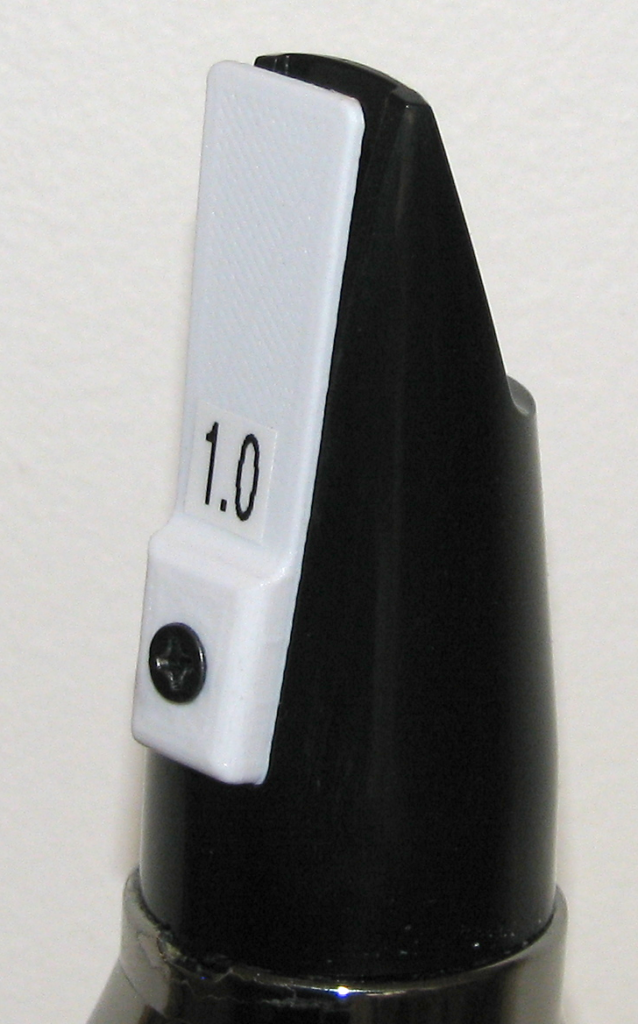 The Roland soft reed produces an R position reading of 0, the 1.0 reed above produces a reading of 2, so it’s just a bit stiffer.

The design for this reed is on the Thingiverse HERE